This Report is a documentation of the “Qustul Survey,” a fieldwork study that aims to understand the spatial transformation of Qustul settlement in the south of Egypt, after half a century of displacement resettlement. Qustul is a Nubian village, occupied with Fadikka Nubians. Nubians of Qustul are displaced; they had to leave their -thousands of years- old villages, which were submerged under the lake of the High Dam. The survey is a part of a doctoral research titled “To be seen: Gender-conscious analysis of displaced publics (a case of Qustul).” Research focuses on spatial injustice in the case of resettled societies, with a particular focus on gender injustice. The research aims to understand spatial issues and explained these phenomena within macro political trends anticipate changes and produce tools to influence spatial production towards a fair shared space of the marginalized and the displaced. This project aimed to contribute to knowledge about Nubian places, as well as look at subtle public stigmas, with the unwavering goal of researching local communities from within, looking critically at data offered by the state and international development organization. The intended product of this research will form a considerable database for a relocated Nubian village and a model for mapping other villages as well by installing an open source platform for crowdsourcing efforts to eventually give the power of documentation back to the people. 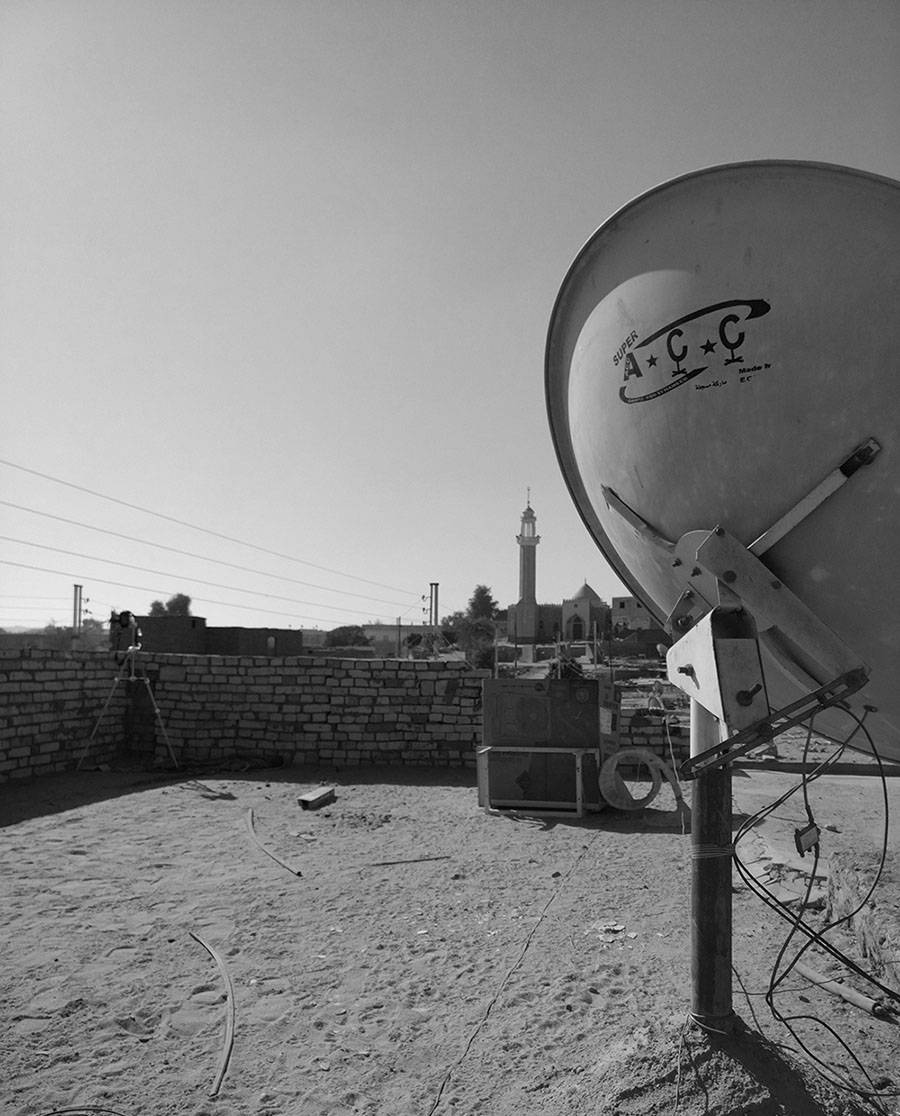 The need for resettlement spread during the 20th century; displacement was mostly driven by Mega developments or drastic environmental changes. Tragically, there are still very few cases worldwide where resettlement has been able to improve, or even restore, the livelihoods of a majority of those who must relocate. Qustul is one the nubian villages relocated by Egypt’s High Dam in the 60’s, Qustul before its relocation was a village by the Nile with agriculture as its economic backbone, after relocation to a settlement with the same name, Qustul, the inhabitants had changed their ways of life and pursued modern lifestyles. Modernity was the motto of the state campaign for their displacement; it was verbalized in several occasions by the -then- President Gamal Abd-El Nasser. Although the village of Qustul had an organic built environment, that developed over hundreds of years, the settlement of Qustul has an orthographic design based on modernists’ theories of urban planning, an effort of engineers and planners in the central government in Cairo. The settlement has a health center, schools, administrative building and a central complex of public spaces that consist of a community center, a coffee house, shops and a mosque.

Due to the current political atmosphere in Egypt, acquisition of knowledge becomes harder. In the case of Qustul and Nubian villages in general, the state aims to avoid research and focus on historical political issues, especially in cases where they are suspect of human rights violation. Therefore acquisition of maps was obstructed by government clerks. Although I was able to acquire maps of land owned by my family (Under this premise), a general map of Qustul was not possible. This research contributes these unavailable maps through the open source platform Openstreetmaps.com. The map was built after manual surveys and measurements in addition to using drone a real footage to create ortho-mosaic maps; the map is exportable by GIS interface and available for scholars and future research. Also, this map is open for changes and crowdsourcing information. 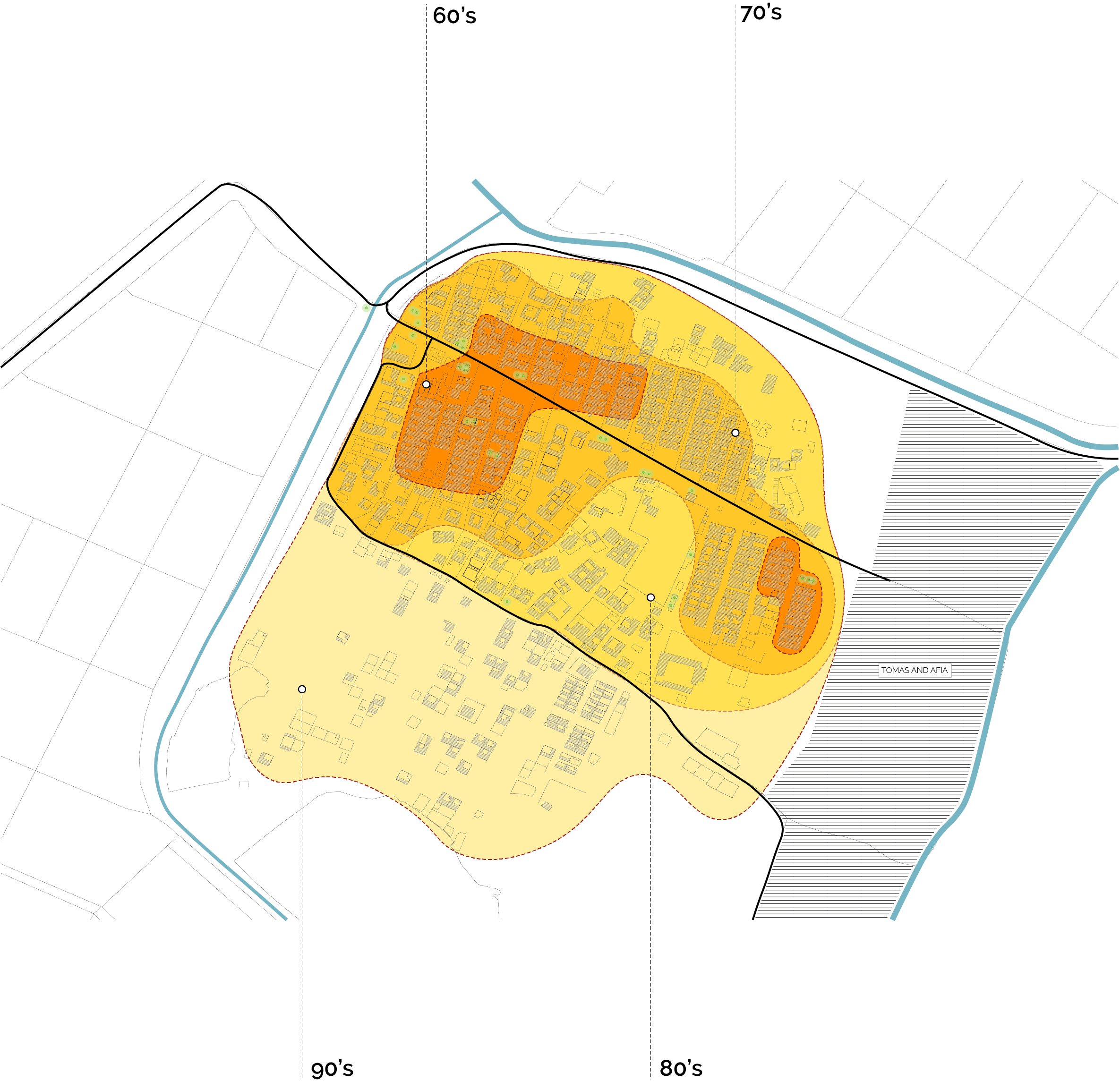 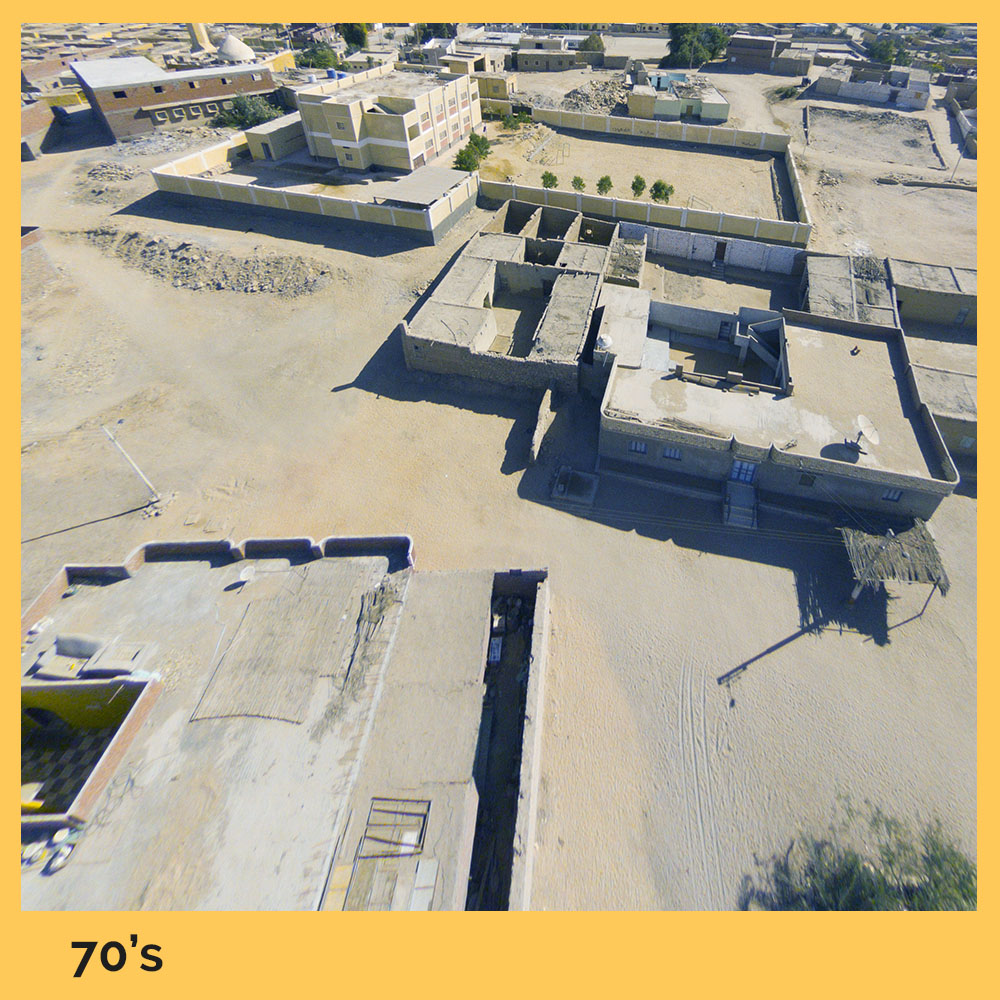 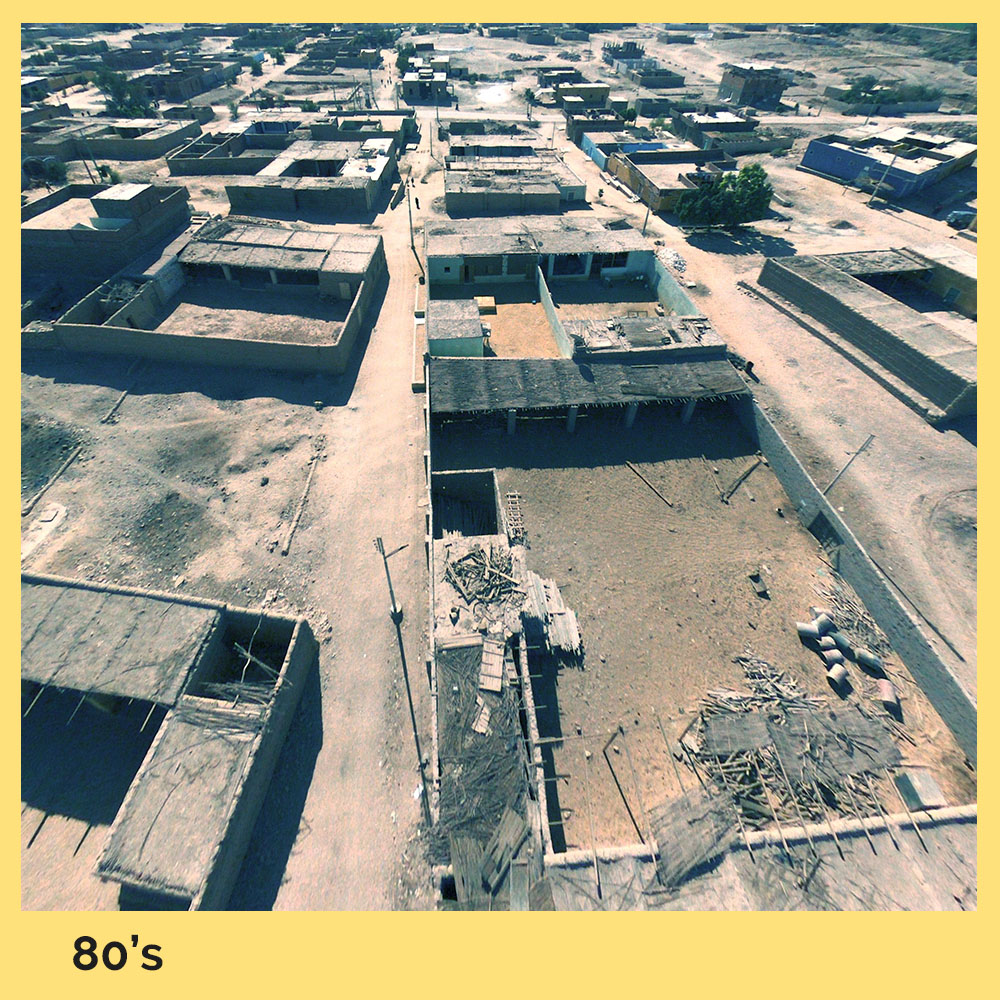 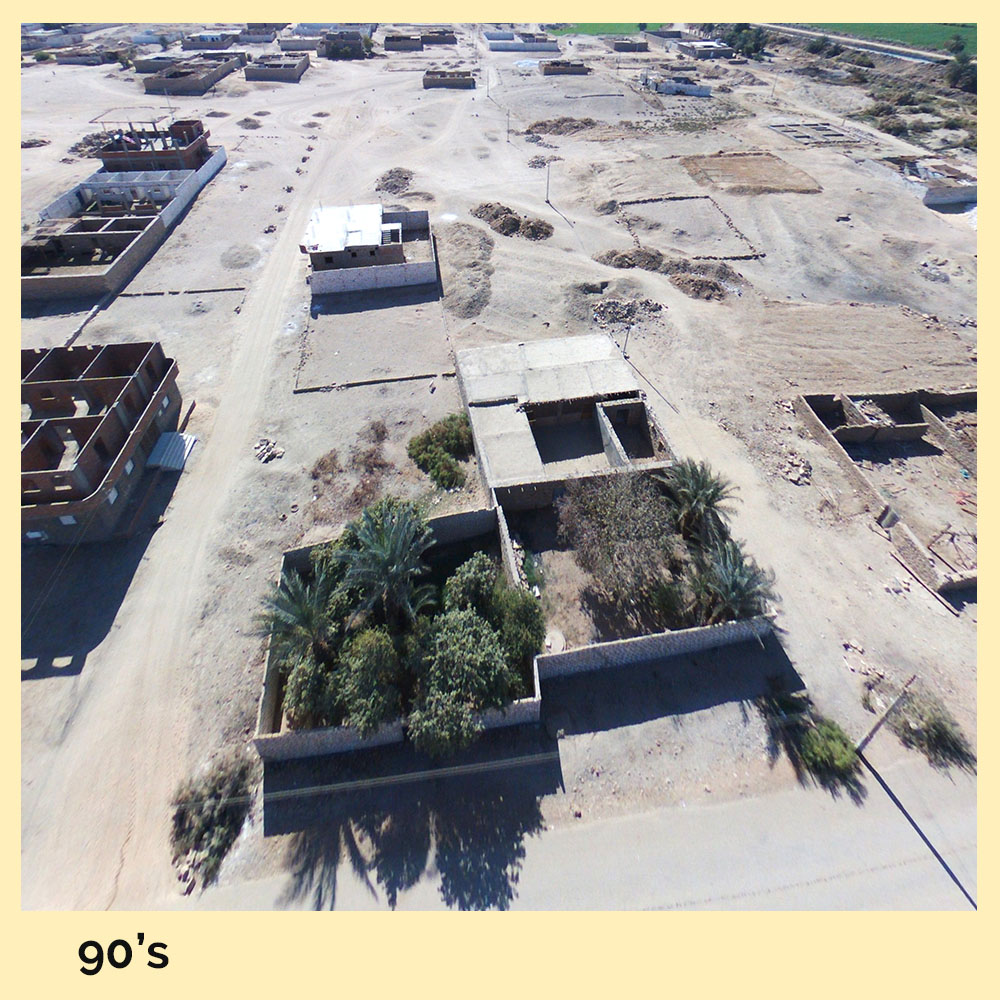 People of Qustul landed in their new settlement to find it incomplete, only 20% of the village was built. People tell stories about their first years in this place with a sad tune; they say it was very hard in the beginning, due to adverse conditions. Mortality rates were higher among children and elderlies; during interviews in migration villages, women told stories of their lost children siblings and relatives. In the 70’s and 80’s, people were occupied with building their houses; stories report conflicts between families over resource and land. In this time, the typologies that emerged in people’s Building history 180 degree Panorama on the settlement of Qustul houses resembled old houses. In addition, the government has added housing units in the compensation plan, which was being refurbished to significant change. People describe the state they received their houses as incomplete. 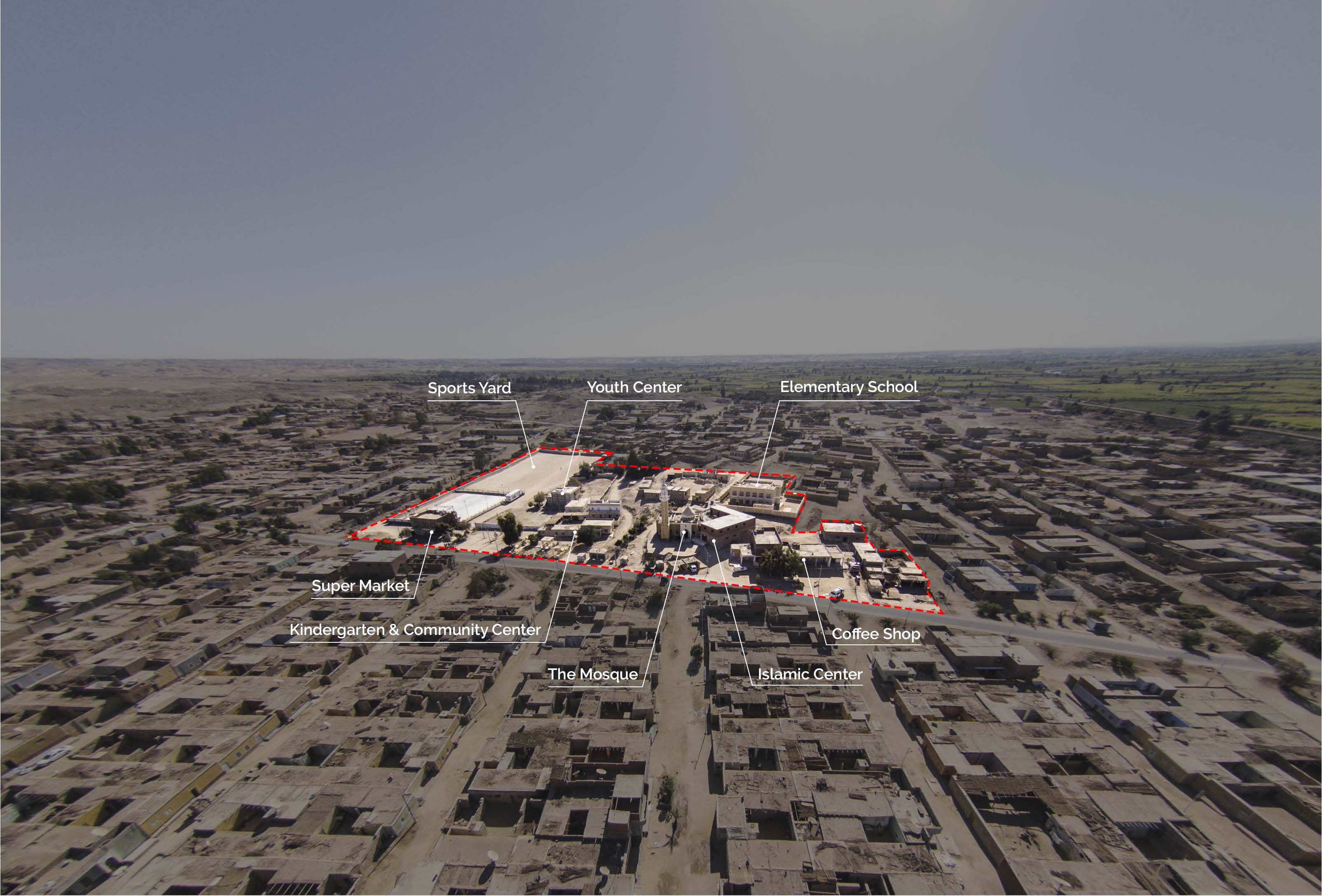 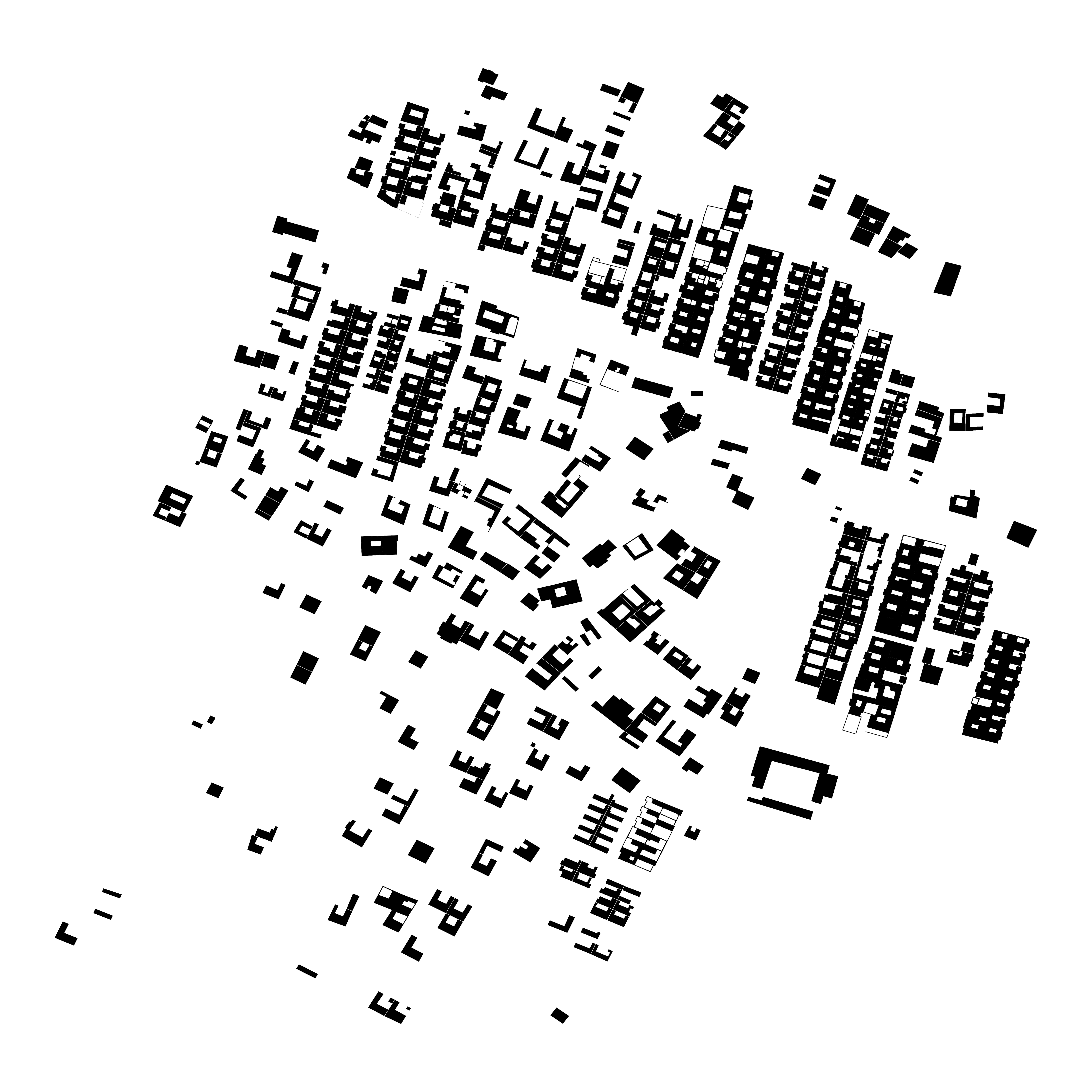 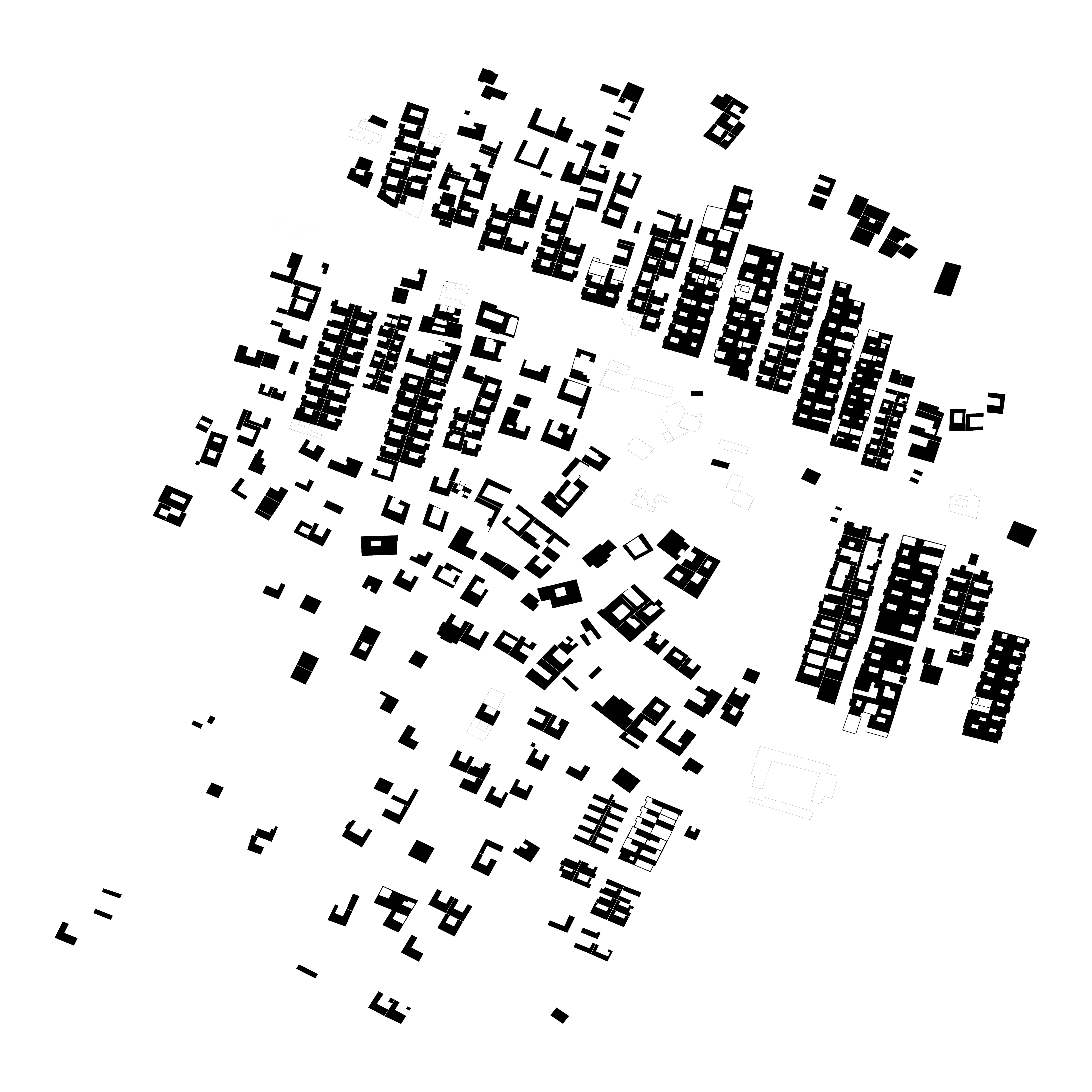 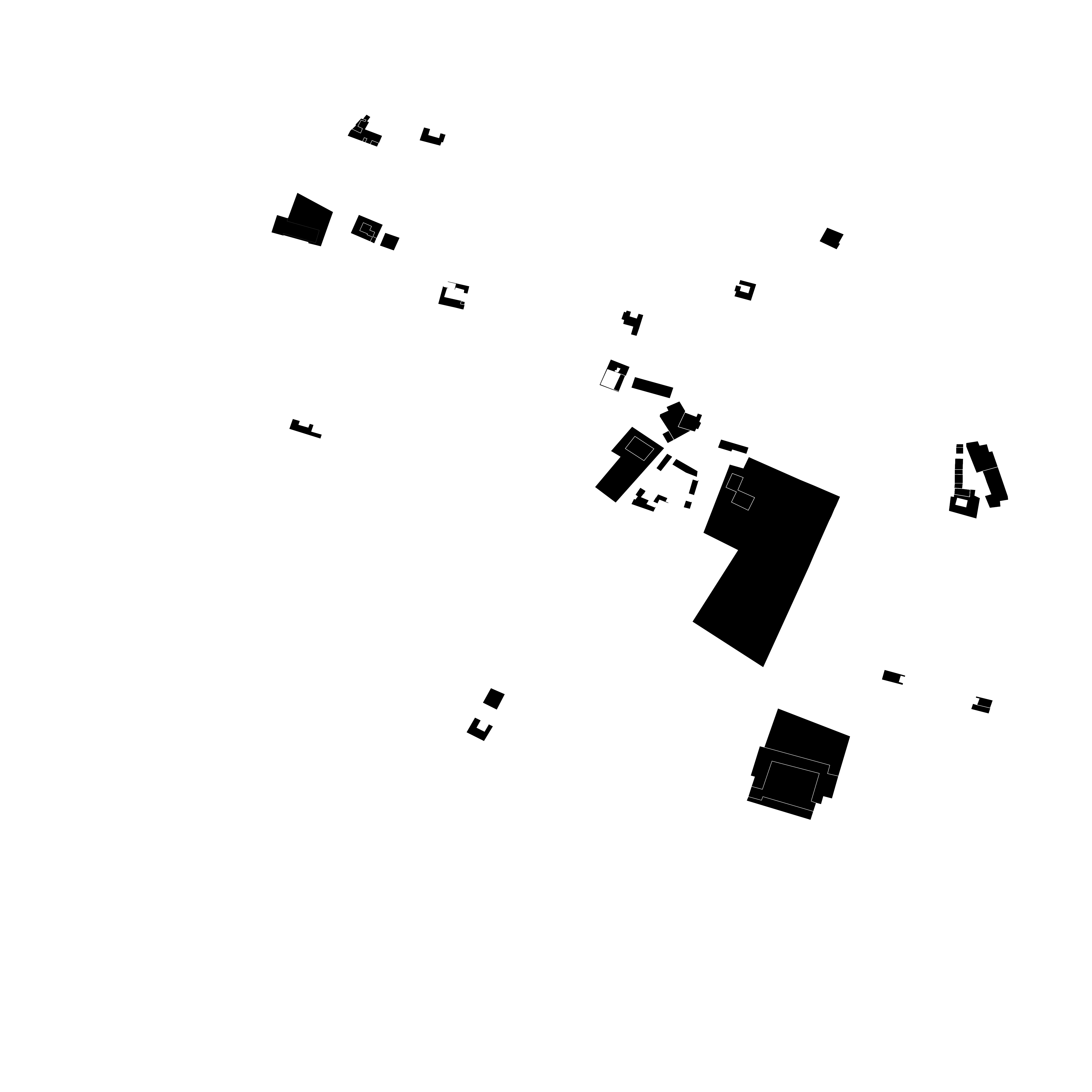 The public sphere consists of spaces that emit a strong gendered stigma. The Mosque, the sports center and the coffee place are male dominated. Women opt to take a longer road to avoid their vicinities. The social disapproval of women’s ventures informal publics is often expressed in the form of stigma and shaming. Women’s lives in public spaces are shaped by the visible and invisible boundaries created by social structures. stigma toward women is one of the mechanisms for perpetuating spatial dichotomy so that women who do transgress the spatial binary and enter public spaces must contend with punishment. 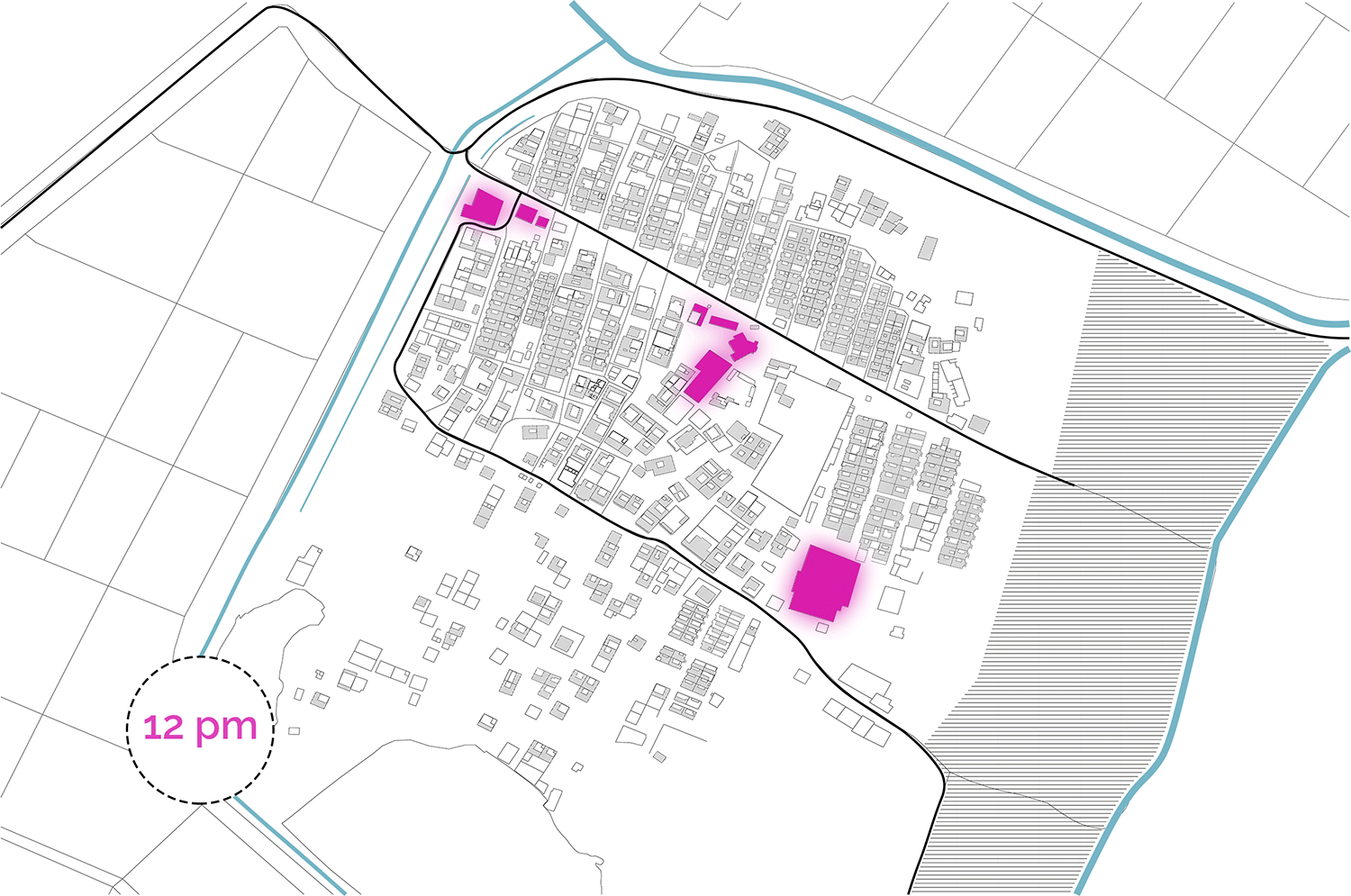 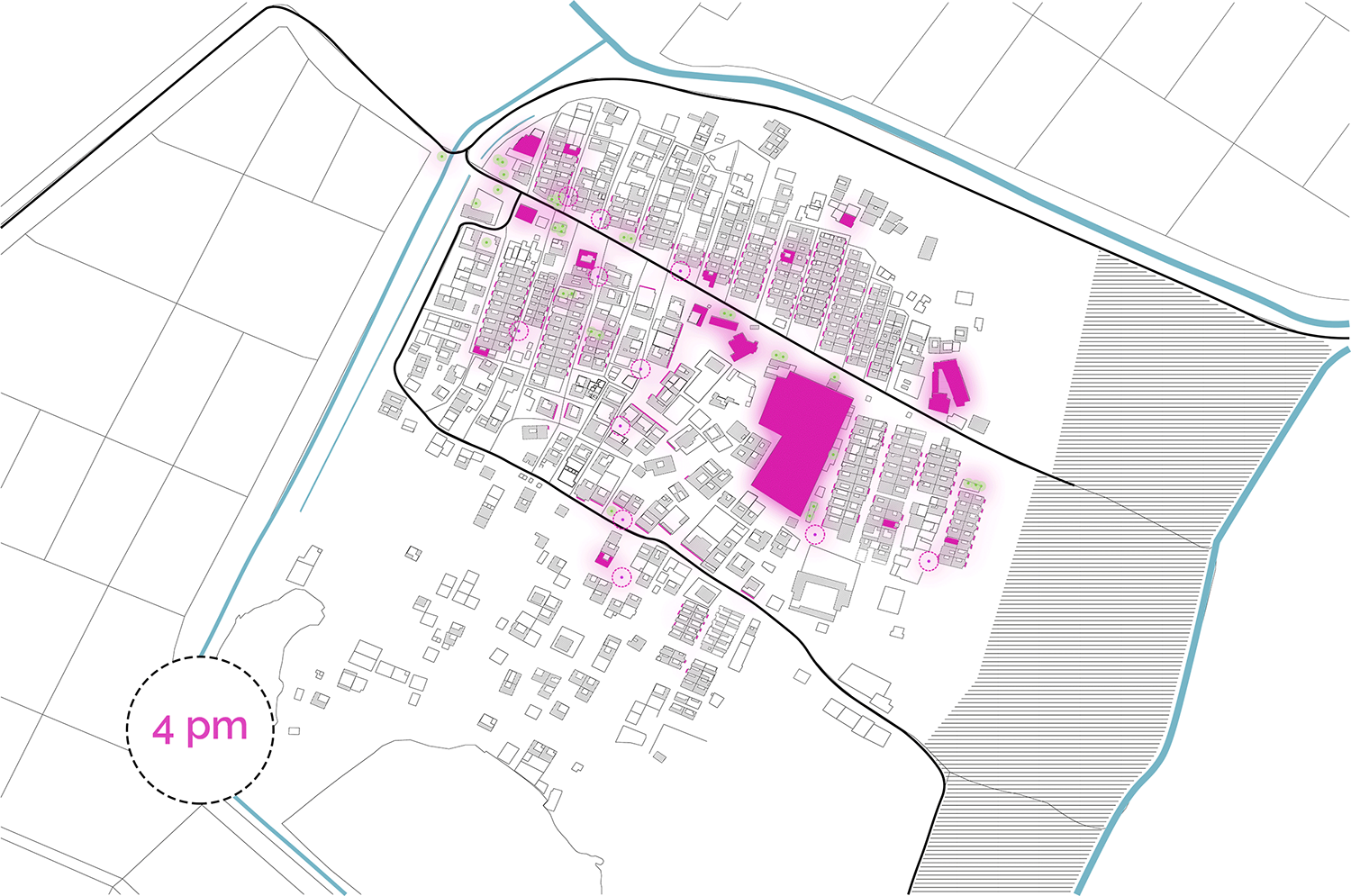 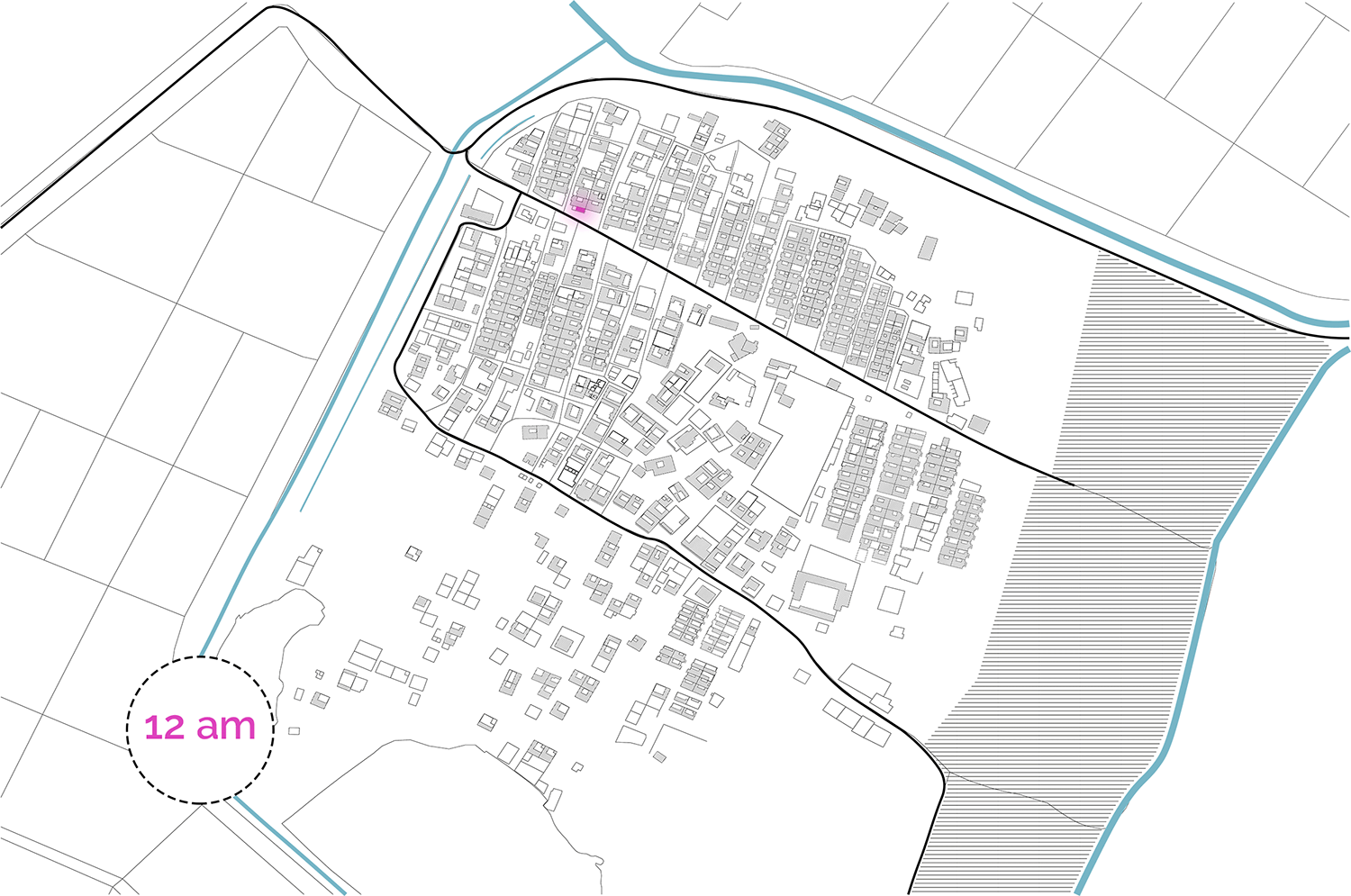 In my mapping of the power structure in the village, I find that the Map consists of three main power institutions; operating simultaneously; sometimes in contestation; but always in flux. In the process, these power dynamics and reconstituting spaces. These institutions are i) The state and its national tendencies. ii) Religious institutions claiming Islamization. iii) The traditional cultural institution, struggling to maintain itself among other hegemonic institutions. Each institution imposes a distinct gender contract. The Egyptian postcolonial nation-state was formed in the 50’s, promoting ideals of socialism and equality, among which gender equality. The state Encouraged female education and women’s venture in the workforce. But their call for equality was to utilise women as resources in an industrial machine. In fact, the state projected a masculine dominance, represented in it’s statesman Abdel Nasser, who was influenced by masculine performances of Soviet statesmanship (Kimmel, Hearn, and Connell 2004). The religious institution, on the other hand, asserts Super Market The Mosque Sports Yard Youth Center Coffee Shop Islamic Center Elementary School Kindergarten & Community Center An areal of village centre a masculine dominance over the public in its entirety. Historically the religious institution was an apparatus of Abdel Nasser’s state, preaching modern and “moderate” ideals. But over time the Wahabi Islamic doctrine have reached the Egyptian culture (Hatem 2005), The effect of Islam on Nubian culture was noted in the Fourteenth century, the Arab historian Ibn Khaldun; he details that “Nubians in positions of authority, who needed to consolidate their ties with the more powerful Arab tribes occupying neighboring deserts, married their sisters to Arab Sheikhs (Fernea and Gerster 1973). A Nubian traditional institution, on the other hand, had a history of matriarchy, like other African societies, women had a significant role in civic life, their places in the public was undeniable. (Amadiume 1997), as an indigenous institution, it is the least dominance in modern Nubia. Despite the efforts of Nubians to preserve its traditional practices 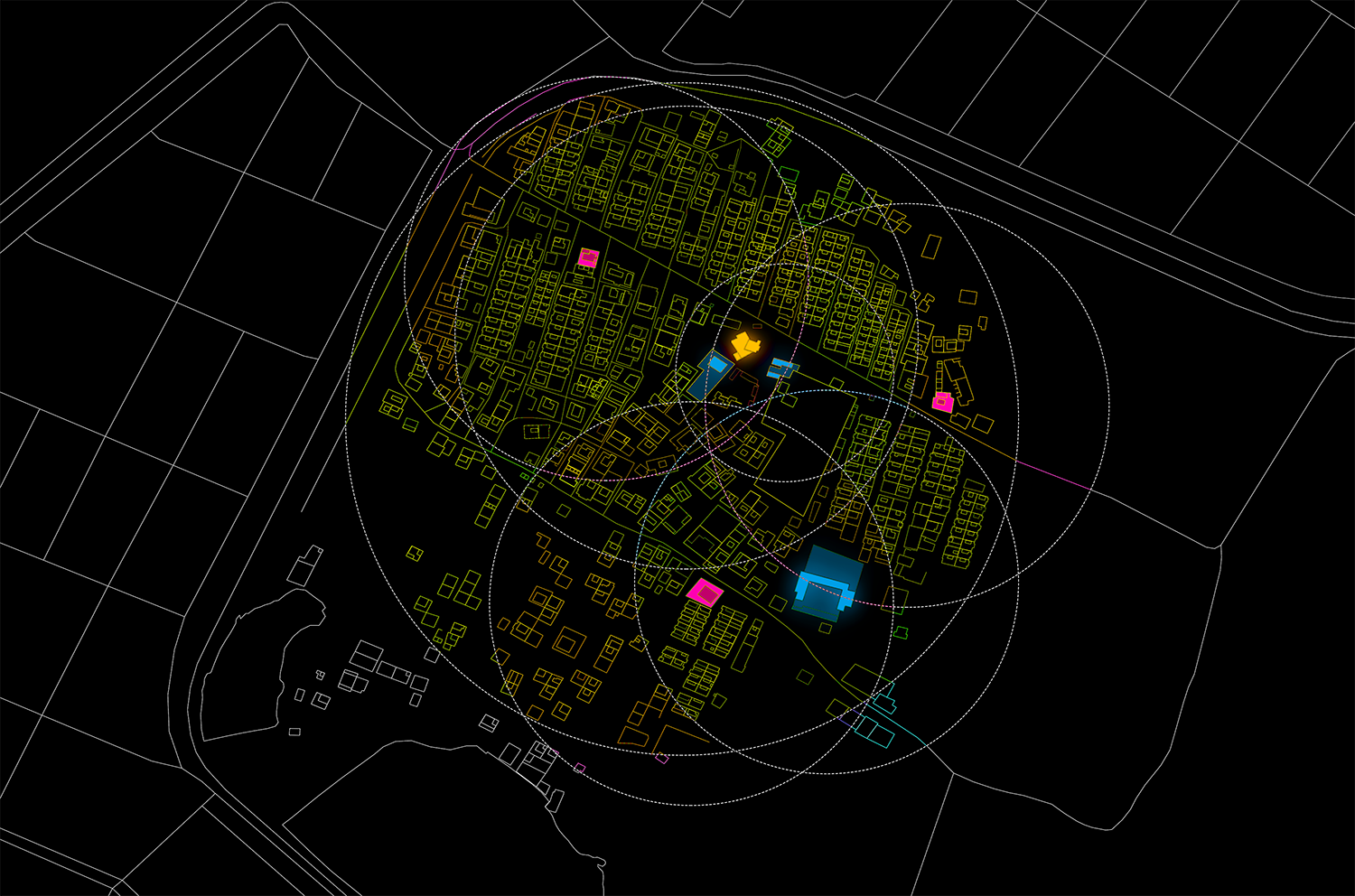